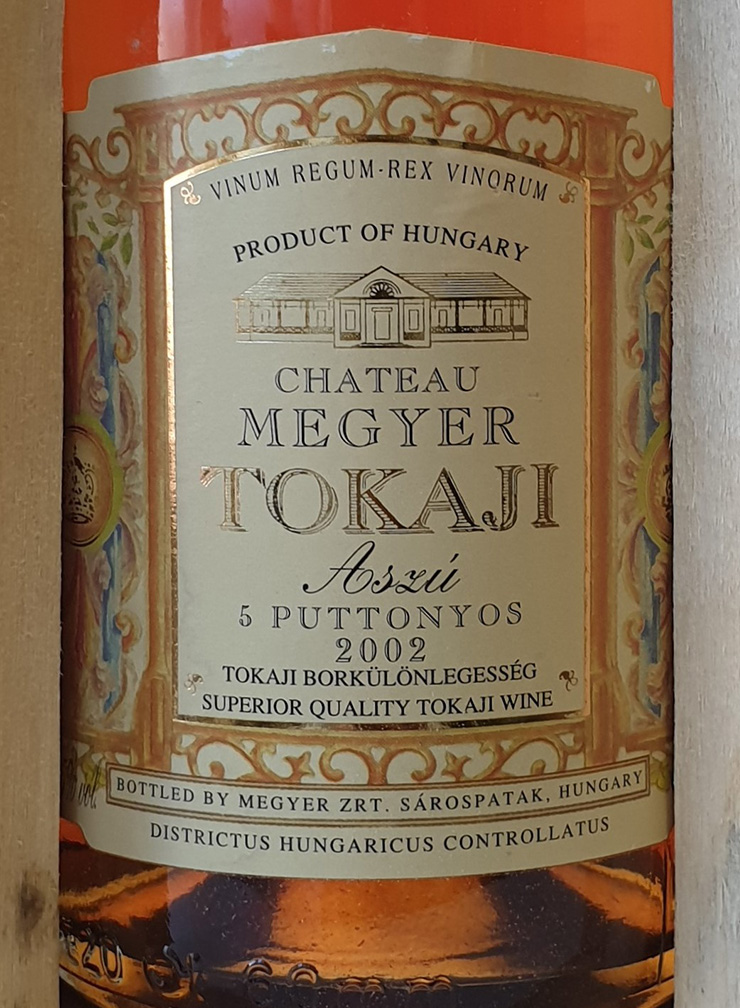 Due to the legal requirements, we sell our products to persons of 18 years of age or older only.

This Sárospatak seated winery was founded in 1992, together with Château Pajzos, by their French owners. Their shared winery owns the Rákóczi Cellar in Sárospatak, close to the castle. This cellar is one of the oldest estates of the wine region. Today, the winery is solely owned by Jean-Louis Laborde, who is also the proprietor of Château Clinet in Pomerol.


"Heaven only serves Ch. Megyer Tokaji Aszú to its best clientele, and this 5 puttonyos masterpiece is reserved for the archangels ... This wine is an interesting creation by any measure. It has sugar, and cannot be mistaken for anything but a sweet wine, but it’s sweetness is never sugary nor cloying. The color is almost that of a dark amber beer, and it sticks lightly to the glass, but is never syrupy. The hint — and I mean tiniest hint — of bitter bite in the back end really shakes it up, and makes it a fantastic pairing with salad, amuse bouche or even light appetizer. This is not a dessert wine — it’s better before the final dish than after. The extra puttonyos — which St. Michael explained was the Hungarian word for “freshly mashed innocence,” something Megyer apparently squeezes into each bottle — do nothing but raise the wine to celestial levels ... Five stars, without hesitation." *****
Christopher Paris (wine and gourmet food writer)

MEGYER ...
... is a south-exposed vineyard with colorful rhyolite tuff bedrock. In the crumbly crop layer, the volcanic bedrock mixes with the top layer, which is conducive to the production of mineral, complex wines. Compared to the Pajzos vineyard, the climate here is less cool, with more hours of sunshine, so the grapes here ripen earlier, compared to Pajzos. The size of the Megyer vineyard is more than 100 hectares, with most vines having been planted between 1968 and 1974. Megyer-dűlő was one of the earliest documented vineyards in the Tokaj Wine Region. The first written reference was as “vinea in monte Meger” in 1324. In 1354 a Sárospatak noble left his large area to the Pauline monastery of Saint Giles in Sátoraljaújhely. Monastic ownership continued until 1526 when the influential aristocratic landowning Perényi family occupied the land and pushed out the previous monastic owners. Following the early end of the noble Perényi line, the land was owned to other aristocrats before it passed to the Lórántffy dynasty in 1596. Zsuzsanna Lórántffy managed the vineyard until she gifted it to the Reformed College in Sárospatak in 1644. During the Counter Reformation the majority of the land was given to the Jesuit monastery in Sárospatak or returned to the Paulines in Sátoraljaújhely. Smaller parcels were part of famous historical family estates. After the dissolution of the Jesuit order in 1773, their areas of vineyards became part of the Sárospatak Reformed church and thus owned by the Reformed College. his ownership structure remained right up until 1950 when the vineyard became state property as part of the Communist takeover. It remained in state hands until 1992.